The Fed Sees Housing Trouble Ahead 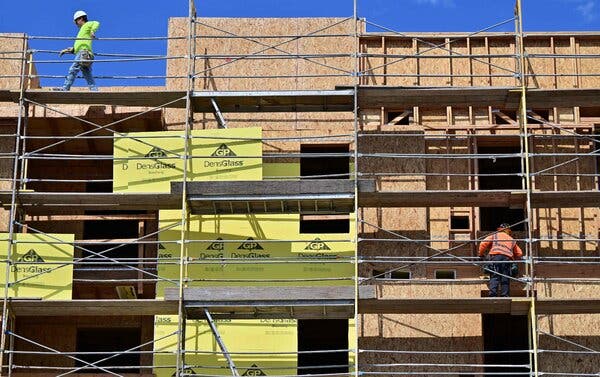 The Fed vs. the housing market

Federal Reserve officials are predicting a slowdown in the housing market. There have been conflicting signals: Home sales have slowed, while housing prices remain high. But a mere slowdown is unlikely to stop the Fed in its crusade to crush inflation, which has led to an increase in interest rates, putting pressure on mortgage rates.

Yesterday the Fed released the minutes from its most recent policy meeting in late July. Fed officials, according to the minutes, think inflation remains too high, and are committed to raising rates. They’re almost certain to raise rates again when they meet next month, reports The Times’s Ben Casselman.

Fed officials did see trouble coming in housing. They said housing activity had “weakened notably,” in large part because of higher mortgage rates. Meeting participants “anticipated that this slowdown in housing activity would continue,” the minutes said. Many have predicted that the Fed’s efforts to slow inflation would crash housing prices, after a big run-up during the pandemic. And a housing bust might force the Fed to stop raising rates, perhaps before it was able to tame inflation.

Housing activity has slowed, but it’s far from a bust, writes Peter Coy, our colleague from Times Opinion who writes an economics newsletter for subscribers. On the question of how many homes are being built, housing starts have dropped, but they’re still about twice what they were at the start of the pandemic, and three times the level they reached after the 2008 housing bust. As for mortgage rates, they generally follow the 10-year Treasury yield, which has been falling recently, and that has caused them to pull back a bit.

And there are factors that may stop any slowdown from turning into a slump. That’s particularly true for housing prices, no matter what the Fed does. There hasn’t been anywhere near the excess of lending that there was in the 2000s. Long-term, we still have far more people who want or will want houses than, well, houses. And that underlying demand is likely to keep prices high.

How much could house prices drop? A report from Fitch this week said that the Fed’s interest-rate moves had indeed made housing prices more likely to fall, and put the largest plausible drop at 15 percent. That would be a loss of around $60,000 for the average American homeowner, which is significant, but less than the nearly $120,000 that the average U.S. home gained in value in the past two years.

CVS, Walgreens and Walmart are hit with huge opioid penalties. The pharmacy chains must pay two hard-hit Ohio counties $650.5 million because of their role in fueling an addiction crisis, a federal judge ruled. It’s the first firm figure for damages the companies have been given.

Europe’s historic heat wave is pounding its economy. A summer of devastating droughts and extreme temperatures has sparked rare wildfires in Britain and brought ship traffic on parts of the Rhine to a standstill. Declining water levels have also hobbled hydroelectric plants in Norway and nuclear ones in France, during the continent’s worst energy crisis in memory.

Amazon is seeking top Hollywood talent. The Wall Street Journal reports that the company’s entertainment unit, Amazon Studios, has held talks with executives including Emma Watts, formerly of Paramount, and Scott Stuber of Netflix, in the hopes of filling out a depleted leadership team. Streaming giants continue to pour billions into original content: The budget for Amazon’s “Lord of the Rings” series reportedly topped $400 million.

What is inflation? Inflation is a loss of purchasing power over time, meaning your dollar will not go as far tomorrow as it did today. It is typically expressed as the annual change in prices for everyday goods and services such as food, furniture, apparel, transportation and toys.

What causes inflation? It can be the result of rising consumer demand. But inflation can also rise and fall based on developments that have little to do with economic conditions, such as limited oil production and supply chain problems.

Is inflation bad? It depends on the circumstances. Fast price increases spell trouble, but moderate price gains can lead to higher wages and job growth.

How does inflation affect the poor? Inflation can be especially hard to shoulder for poor households because they spend a bigger chunk of their budgets on necessities like food, housing and gas.

A top Trump money man will plead guilty, and could take the stand. The Trump Organization’s longtime C.F.O., Allen Weisselberg, is expected to plead guilty today to all 15 felony charges against him. In a win for prosecutors, the deal would require him to testify — if called upon — when the company faces trial on similar charges of tax evasion.

The activist investor Ryan Cohen made a filing on Monday about options to purchase Bed Bath & Beyond shares that sent the stock soaring as much as 70 percent. Then yesterday he filed a registration document that would allow him to sell all of his 10 percent stake in the company, a meme-stock favorite. So, what does this all mean?

A quick recap: In March, Cohen revealed that he owned a 9.8 percent stake in Bed Bath & Beyond and called for several changes at the company, including a sale of the Buy Buy Baby brand. The home-goods chain settled with him a few weeks later, adding three of his nominees to the board. But the company’s situation hasn’t improved much since then; its C.E.O., Mark Tritton, was ousted in June, net sales have continued to fall and supply chain snarls have dragged on. It had a net loss of about $358 million in the most recent quarter and $140 million in cash on hand, down from over $1.1 billion a year before. As of last week, its shares had fallen about 40 percent since it announced its deal with Cohen.

Back to those options. Cohen has call options in Bed Bath & Beyond with astronomical strike prices of $60, $75 and $80 per share. (The stock closed at $23 yesterday.) He outlined those options when he disclosed his initial stake. But it appears Cohen had to make a fresh disclosure on Monday night because the retailer changed its number of outstanding shares, leaving him with more than 10 percent and qualifying him as a major shareholder. Still, that filing sent retail traders into a tizzy. They bought $73 million in Bed Bath & Beyond stock on Tuesday and flooded Reddit’s WallStreetBets board with memes urging Cohen on.

Now Cohen wants the ability to sell out. Yesterday, via his investment firm RC Ventures, Cohen filed a Form 144, which is required of any large shareholder who wants to sell a chunk of their shares. Under S.E.C. rules, anyone who files the form “shall have a bona fide intention to sell the securities” within a reasonable time. (Experts note that Cohen may ultimately sell none, some or all of his stake.) The stock was down about 13 percent in pre-market trading today.

“Good for him,” said Daniel Taylor, a professor of forensic accounting at Wharton: “That’s prudent risk management, so that he can sell the shares if he wants to lock in the giant gain.” Things might get into a gray area, Taylor said, if Cohen had bought the stock and disclosed the calls solely to lift Bed Bath & Beyond’s share price and flip a profit. But that sort of intent would be hard to prove.

Whatever the investor was seeking to do — a spokesperson for him did not immediately respond to requests for comment — the situation gets at the core of the concerns around meme-stock frenzies, and who ultimately profits from them. Did Cohen ever actually believe Bed Bath & Beyond could get to $80 a share? And does it matter to those who are now furiously trading the stock?

“If I do become part of the cautionary tale in crypto, I’ll know I didn’t just sit by and do nothing.”

— David Little, a 35-year-old engineer in Houston who has helped organize customers of the bankrupt crypto company Celsius Networks seeking to get their money back.

Understand Inflation and How It Affects You

Musk was kidding about Man U, but …

The soccer powerhouse Manchester United was trending this week after Elon Musk tweeted that he was buying the club. It soon became clear that this was just Musk being Musk, and that he had no such plans. But Musk triggered chatter about who else might want a piece of United. Its shares jumped nearly 7 percent on the New York Stock Exchange yesterday as reports swirled that its owners, the Glazer family, may be open to selling a minority stake.

For years, United’s fans have been clamoring for new blood and money to make the team competitive again. It remains one of the most valuable sports franchises on earth, but its last English Premier League title came in 2013. Its biggest star, Cristiano Ronaldo, is disgruntled and has remained goalless through the first two matches of the season, both lost to far less wealthy teams.

Musk’s tweet unleashed lots of talk about a potential sale. Big-name investors like the private equity group Apollo Global Management and Britain’s richest man, Jim Ratcliffe, have been mentioned as possible white knights. A representative for Ratcliffe, who founded the chemicals giant Ineos, told DealBook that he “would be interested in buying the club if it was for sale.” Manchester United declined to comment, and Apollo did not immediately respond to a request for comment.

After yesterday’s rally in the stock, United’s market capitalization hit $2.2 billion, but soccer watchers say that’s still too low. Data crunchers at Football Benchmark, an independent firm that analyzes the top teams, value the club at $2.8 billion given its unmatched global popularity.

Manchester United’s finances may make it tough for it to afford more top talent. It reported an adjusted loss of 26.6 million pounds ($32.1 million)for the first nine months of its fiscal year. Its net debt load stood at £495 million, while cash on the books amounted to £95 million. Such indebtedness is not uncommon among Europe’s soccer powerhouses: Barcelona and the London team Tottenham Hotspur owe more than £1 billion.

Many of the European teams most awash in red are the same ones that sought to form a breakaway Super League last year. That plan failed, but it hasn’t sunk club valuations. In May, the private equity firm Clearlake Capital and the American billionaire Todd Boehly acquired Chelsea, another London club, from the Russian oligarch Roman Abramovich in a £2.5 billion deal. In the Abramovich years, Chelsea lost as much as $1 million a week.

Best of the rest

We’d like your feedback! Please email thoughts and suggestions to [email protected]