Revelry and Unease in Alaska as Cruises Return

Even before a rock slide in early July shut down one of the berths for the season, only about 275,000 passengers had disembarked in May and June …

Even before a rock slide in early July shut down one of the berths for the season, only about 275,000 passengers had disembarked in May and June from cruise ships in Skagway, Alaska.

That number, tallied by the U.S. Customs and Border Protection, was nearly 40 percent lower than what it would have been if the ships were full when they pulled into the borough, a Gold Rush-era destination nestled in a valley by the Tongass National Forest.

Ships coming into the state’s capital, Juneau, and Ketchikan, another southeast Alaskan town that relies heavily on cruise tourism, were on average about 70 percent full in July, said Renée Limoge Reeve, vice president of government and community relations at the Cruise Lines International Association of Alaska.

That would appear to paint a bleak picture for Alaska’s cruise industry, particularly for Skagway, which welcomed more than one million cruise passengers in 2019. But that is not how many locals are describing it.

Two years after the pandemic crushed Alaska’s cruise industry and dealt a heavy blow to the state’s port towns, the sight of tourists ambling down the gangway, even in reduced numbers, has business owners and tour operators breathing a sigh of relief.

Andrew Cremata, the mayor of Skagway, said that he estimates the year will end with a total of about 600,000 visitors from cruises. Still, he said he is happy to see the town busy again.

“We’re surviving,” Mr. Cremata said. “And we’re so glad to be back in business.”

In April 2021, cruise lines in the United States began putting their fleets back out to sea after more than a year under a “no sail” order. But in Alaska, the industry would remain stalled for nearly three more months, in large part because of a law that forced cruise ships to stop in Canada, which had banned cruise ships until 2022 because of the pandemic.

The shutdown in 2020 and the “no sail order” from Canada had “catastrophic” effects on the southeastern part of the state, according to a 2021 study by several state agencies.

The state lost at least $1.7 billion in revenues in 2020, and during the first months of 2021 towns and port communities that rely on the cruise industry lost more than 22,000 jobs, according to the report.

Read More on the Coronavirus Pandemic

In May 2021, Congress passed the Alaska Tourism Restoration Act, which allowed cruise ships to sail directly to Alaska without having to stop in Canada. But industry leaders still needed to come up with agreements with port communities, which needed reassurances that their fragile health systems would not be overwhelmed should there be an outbreak of Covid, said Ms. Limoge Reeve.

Ships then had to complete the process of bringing back their crews, said Anne Madison, a spokeswoman for the Cruise Lines International Association.

“It takes about 90 days to stand up a ship and have it ready to sail,” she said.

The Alaska cruise season is brief — it typically runs from April through October — and the 2021 season was barely salvaged. A total of about 57,000 passengers came through Skagway that year, said Mr. Cremata. 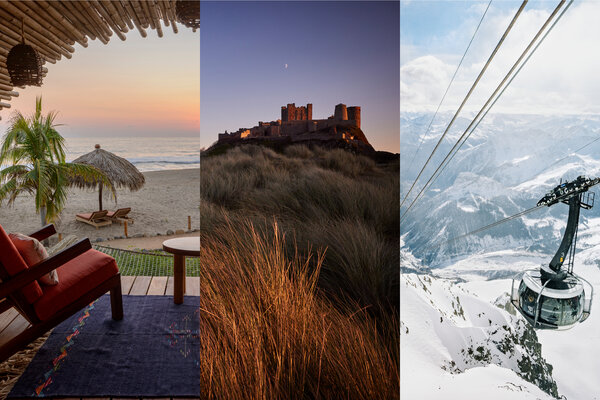 52 Places for a Changed World

The 2022 list highlights places around the globe where travelers can be part of the solution.

It was a period of terrible stress on businesses and residents, recalled Tina Cyr, who owns a small local art gallery with her partner in Skagway.

“We were just living on our savings,” she said.

But there was also a respite from the normally taxing summer season, she said. Ms. Cyr said she and her partner took a summer vacation for the first time in years. “All of us were going, ‘It’s great to have our town back,’” Ms. Cyr said. “I heard that a lot.”

The streets were so quiet that a family of foxes was regularly seen running downtown, said Jaime Bricker, Skagway’s tourism director, who visited nearby Glacier Point, a popular tourist destination, for the first time in her life.

“My family and I embraced the quiet every chance we got,” Ms. Bricker said.

Around Glacier Bay National Park, a haven for seals, whales, dolphins and bears about 90 miles west of Juneau, the cruise ships were not missed, said Stephen Van Derhoff, one of the owners of Spirit Walker Expeditions of Alaska in Gustavus, a town of about 500 people near the park.

“To see the giant cruises going by and the exhaust and smoke coming off them can have a negative impact,” Mr. Van Derhoff said. “For the first half of 2021 there was very little cruise ship traffic and that was actually very nice.”

Fewer ships at sea also gave scientists the opportunity to see the effects on humpback whales.

In Skagway, no one wanted the cruise ships gone for long, said Mr. Cremata, the mayor.

“I know there are some places that have a love-hate relationship with tourists,” he said. “But we love our tourists.”

More are coming, according to cruise companies, which in general have been offering discounts as they find their ships have room, in part because passengers are waiting longer to book.

Norwegian Cruise Line said it has five vessels sailing in the Alaskan region.

For the first time, Hurtigruten Expeditions, a smaller cruise company that specializes in trips to remote locations like Antarctica and the Arctic has operated trips to Alaska this year for the first time.

Ms. Limoge Reeve said industry officials project Alaska will see more than a million cruise passengers in 2022. “We’re really hopeful for next year,” she said. “Alaska continues to be a bucket list destination for people.”

Yet some wonder about the future of the cruise industry in Alaska.

Nicole Church, the owner of the Black Bear Inn in Ketchikan, said she believes people are now generally wary of boarding a ship filled with thousands of people.

Ms. Church said her inn has been booked since June, not with traditional cruise passengers but with guests who made their own way to the city or traveled on smaller cruise lines.

“They want to take an entire day hike, and go to Ward Lake and watch the white swans,” she said.

Dr. Atkinson, one of the professors studying humpback whales, described “mixed” feelings about the return of cruises.

While she is concerned about their effects on the environment, she said cruise ships, with their ability to take thousands of people to see the receding glaciers of Alaska, have an incredible opportunity to educate passengers about climate change.

“They have a captive audience,” Dr. Atkinson said.

English News
Binance-Linked BNB Price Falls Close to 4% on Hack Rumors
The price of BNB was falling about 4% on Thursday after rumors surfaced that the Binance-linked token may have been the target of an attack worth ...
Denis Darnel
0

English News
Spain travel rules: UK and EU travellers still face different rules at the border
Spain is the only European country that still has COVID restrictions in place for non-EU travellers this month. The popular destination dropped ...
Denis Darnel
0

English News
Bitcoin’s Correlation With Gold Hits Highest Level in Over a Year
Bitcoin’s reduced tendency to move in tandem with U.S. stocks has refocused analysts on a correlation that’s suddenly strengthening: the ...
Denis Darnel
0

English News
Atlantic Council Director Sees ‘Splintering’ Financial System if US Falls Behind on CBDCs
The U.S. dollar’s place as the world’s dominant reserve currency, while not in immediate danger, could eventually change as countries continue to ...
Denis Darnel
0